The telescope, that has been at the heart of the astronomy observatory at Keystone College since 1973, has a history reaching back to the late 19th century. It was constructed originally in 1882 or 1883 (records differ) for Beloit College in Beloit, Wisconsin. 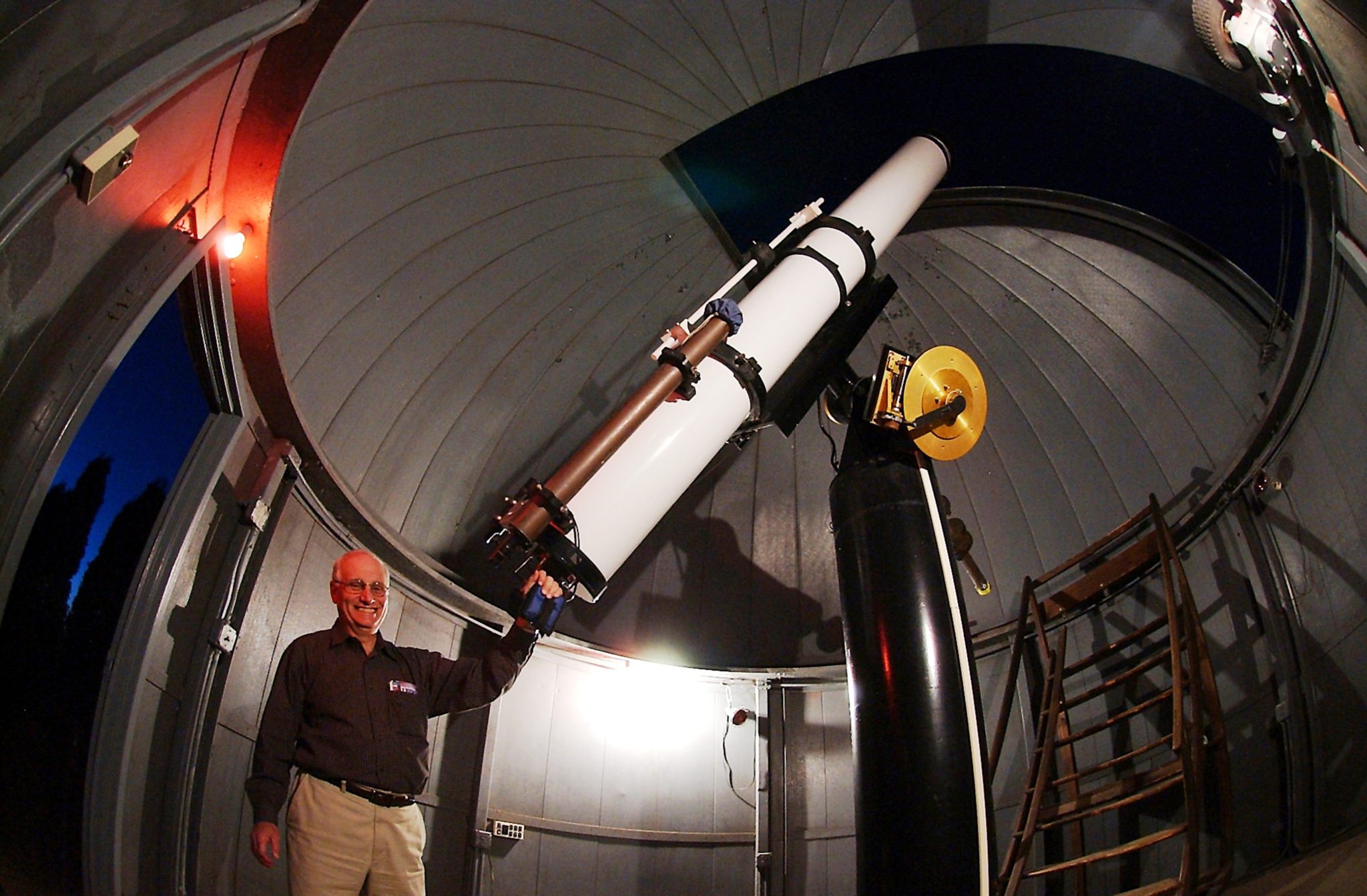 The objective lens and finder telescope were built by the firm of Alvan Clark and Sons. The Clark Company began making lenses and building telescopes in 1846 in Cambridge, Mass. The Clarks were master craftsmen in grinding and polishing lenses for refracting telescopes and made many of the finest lenses ever ground in the United States. The equatorial mount and tube was the first telescope mount made by Warner and Swasey, a machine-tool company from Cleveland, Ohio. The mount proved not to be sufficiently sturdy and was replaced in 1916 by Warner and Swasey’s larger and heavier second edition telescope mount. The original mount now resides in the American Museum of History at the Smithsonian Institution in Washington, DC.

Beloit College utilized the telescope until 1965, when they built a new observatory with a larger telescope. In 1967 the telescope was acquired From Beloit College by Dave Garroway, a television personality best known for being the original host of the Today Show on NBC. He moved the telescope to his home in Scituate, MA and installed it in a 16 foot dome. In 1971 Mr. Garroway moved to California and chose not to take the telescope with him. He decided to sell the telescope and dome and placed an advertisement in the magazine Sky & Telescope. In August, 1971 Professor Cupillari saw the advertisement, and with the approval of then President Harry K. Miller Jr. and the support of Margarita B. Chamberlin, Chairperson of the Board of Trustees, he wrote a letter of inquiry to Mr. Garroway. A series of letters and telephone calls followed. Numerous individuals and organizations, including the Smithsonian Institution, indicated an interest in acquiring the telescope and dome. The Smithsonian Institution wanted to buy it to reunite the lens and finder telescope with the original Warner and Swasey mount. Ultimately, Mr. Garroway, assured that Keystone College would make the telescope available to students of all ages and the general public, rejected all other offers and sold his ‘baby’ to Keystone College. In the fall of 1971, the dome and telescope were dismantled and transported to Keystone College and placed in storage.

The Clark Lens and Telescope

Alvan Clark and his sons, Alvan Graham and George, were perfectionists in grinding and polishing their lenses. The two Alvans ground the lenses manually and tested them in a long tunnel adjacent to their factory. With infinite care, they did the final polishing and corrections with optical rouge on their bare thumbs. George, a mechanical expert, built the controls.

In 1996 the Clark lens and the 3 ½ inch finder telescope, also made by the Clarks, were installed on a new equatorial mount with a modern electronic drive system. The Warner & Swasey mount was worn out and could no longer be repaired. The current mount was designed and fabricated by D & G Optical in Manheim, PA.

Keystone’s 9 ½ inch Clark lens, rated on a scale of one to ten, one being perfect, scores about a two. This rating is better than lenses from many other makers and even better than some other Clark lenses. Several of the best known telescopes made by the Clark family include the 26 inch at the U.S. Naval Observatory, the 36 inch at the Lick Observatory in Santa Cruz, CA, and the 40 inch at the Yerkes Observatory in Williams Bay, WI, the largest refractor lens ever made. Closer to home, Bucknell University has a Clark telescope with a 10 inch lens.

The main support pedestal is nearly 9 ½ feet high and weighs 2000 pounds. The twelve-foot long tube, equatorial head, counter weights, and attachments have a combined weight of 500 pounds, and yet the telescope can be moved easily with a four-pound effort when properly balanced. The dome, 16 feet in diameter, rotates a full 360 degrees. The automatic tracking system of the telescope is driven by a small electric motor that is connected to a series of gears that rotate the telescope.

The Clark telescope will effectively magnify objects from 70X to 700X. Because of the limiting effects of Earth’s atmosphere, however, it is most often used at magnifying powers of 100X to 300X. The Clark telescope gives excellent views of the moon and planets Mercury, Venus, Mars, Jupiter, Saturn, and Uranus.

The Clark refracting telescope has a long and illustrious history, being one of more than six hundred telescopes made by the Clarks, ranging in size from three inches to the Yerkes forty inch. It continues to show vivid and wondrous views of the skies to the students and people of Northeast Pennsylvania.