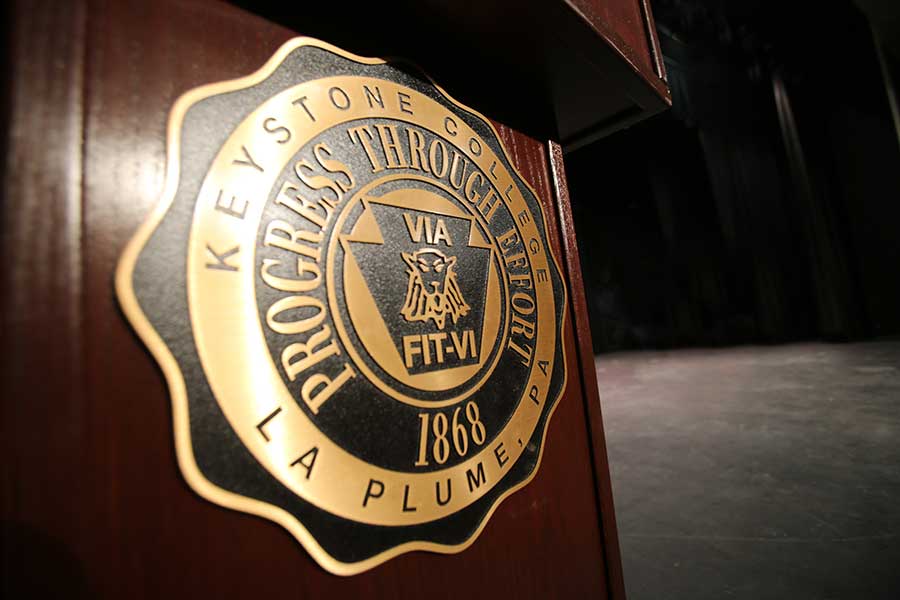 “We will certainly benefit from their extensive expertise and their tremendous dedication as we continue to serve our students and the local community in these unique and challenging times.”
Keystone President Tracy L. Brundage, Ph.D.

Sam Ceccacci, Michael Narcavage, Attorney Jennifer Walsh, and Jason Washo ’05 have been elected as the newest members of the Keystone College Board of Trustees.

“Keystone College welcomes our newest Board of Trustees members. Our college community will certainly benefit from their extensive expertise and their tremendous dedication as we continue to serve our students and the local community in these unique and challenging times,” said Keystone President Tracy L. Brundage, Ph.D.

“On behalf of the entire Board of Trustees, we welcome our newest members and look forward to continuing Keystone’s role as a leading educational institution in our community and our region,” said Board Chair James C. Clark.

Meet the New Board Members Mr. Ceccacci is the former executive director of the Scranton Lackawanna Human Development Agency, Inc. Now retired, Mr. Ceccacci spent his entire career with the agency as Head Start coordinator, director, and executive director. His career spanned over 43 years during which he oversaw the growth of the Head Start program from 110 to over 1,500 children and families. Mr. Narcavage is senior manager, government and community affairs for Southwestern Energy. He joined Southwestern in 2013 and has also served as community relations manager.

Prior to joining Southwestern, he served as manager of corporate development for Chesapeake Energy and Archbald Borough manager. Mr. Narcavage was state director for U.S. Senator Rick Santorum from 1997- 2007. He has also served as special projects and government affairs coordinator for Lackawanna County.

Mr. Narcavage obtained a bachelor of science in administration of justice from Penn State University in 1995. He was named Penn State Scranton Alumni Society Alumnus of the Year in 2013 and the Marcellus Shale Coalition Speakers Bureau Outstanding Presenter, also in 2013. He has served Keystone College in a variety of ways, particularly in donating tools and supplies to the geology department while an employee of Southwestern Energy.

An active volunteer in the community, he serves on the Northern Tier and Lackawanna County Workforce Development Boards, and boards of Penn’s Northeast and the Wyoming County Chamber of Commerce. Attorney Walsh is senior vice president and general counsel for The Wright Center for Graduate Medical Education. She began serving The Wright Center as private counsel in 2012 and joined the organization as senior vice president and general counsel in 2016. She graduated from Bucknell University in 1992 with a bachelor of music in vocal performance, followed by with a master of music in vocal performance in 1994 from the University of Minnesota.

Attorney Walsh then went to law school, graduating from Villanova University School of Law in 1998. She spent part of her career as an attorney in federal service as a law clerk to Judge William J. Nealon and as assistant United States attorney for the Middle District of Pennsylvania. In private practice, she represented corporate clients in the arenas of litigation, organizational development, compliance, governance education, and fiduciary engagement. Attorney Walsh has served on numerous non-profit boards of directors during her career. Mr. Washo has more than 20 years of experience in information technology, having served in senior leadership roles for a global information management company. He now serves as an adjunct faculty member at the University of Scranton, teaching graduate-level software engineering courses.

A guest lecturer at a variety of technology events and conferences, Mr. Washo is a published author and guest blogger who writes about technology and its impact on business. He has served on a variety of local community boards and organizations, including TecBridge and Skills in Scranton. He is an honorary member of Upsilon Pi Epsilon Computer Science Honor Society and Delta Mu Delta International Honor Society in Business.