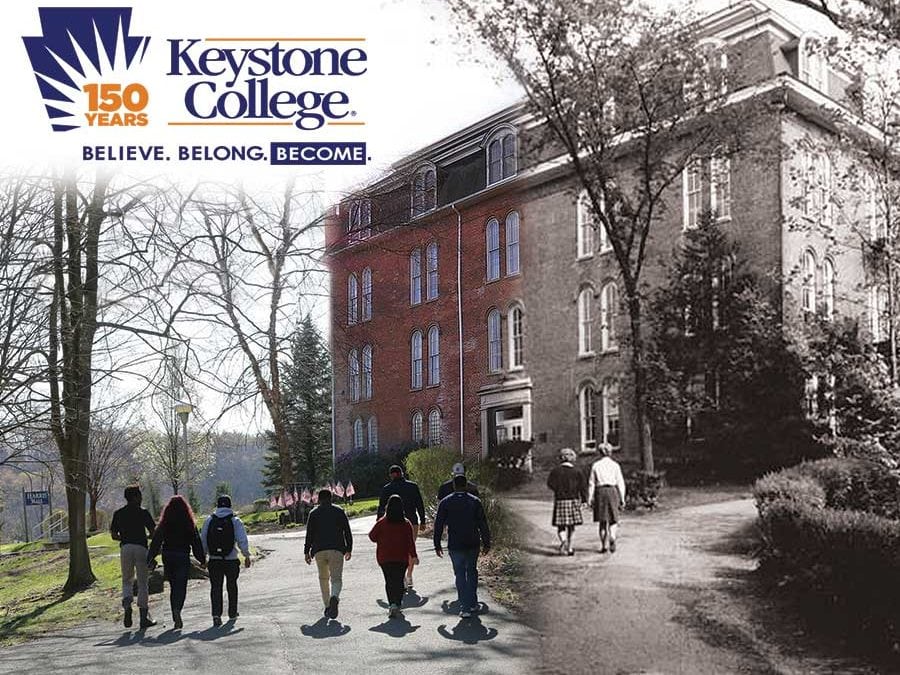 One Hundred and Fifty Years.

In some ways, the passing of a century and a half seems like forever. In others, especially in the life of an educational institution, it seems like the mere blink of an eye.

For Keystone College, founded with exceptional wisdom and vision so many years ago, the passage of time has truly exemplified that double-edged paradox of a slow and steady journey through history, while at the same time making remarkable progress year by year and decade by decade.

This year, the entire Keystone community will come together to celebrate the 150th anniversary of this special place. It will be a year of joyous events as we gather at different times and in different places to celebrate what Keystone means to all of us, both as a community and individually. For those reasons and many others, the passing of time during the next 365 days will be truly special for each and every Keystonian.

A Brief History: Progress through Effort

In order to truly appreciate the present, it’s sometimes beneficial and necessary to take a few moments to examine the past. In the specific case of Keystone, the “past” began in 1868 in a rural community called Factoryville, nestled in the mountains of Northeastern Pennsylvania. A Keystone Academy ad that appeared in the Morning Republican newspaper, Scranton, in 1869.

While eastern cities like New York, Philadelphia, and Baltimore continued to grow, the nation was still very much a collection of farms and small communities. As Factoryville residents rejoiced at the conclusion of the Civil War, community leaders also worried about the educational needs of their children. There was no secondary school between Scranton, Pa., and Binghamton, N.Y., and they feared their children would be left behind in a world in which education was becoming an increased priority. The solution to that problem began to take root.

“As the community along the lowlands of the Nokomis and Tunkhannock Creeks developed, a small group of enterprising men saw the need for education beyond the elementary school level,” wrote local historian and author Glenn D. Adams in his 1999 work, A History of the Academy and The College, 1868-1998. “Early in 1868, Charles Reynolds, great-grandson of Captain Robert Reynolds and Stephen Capwell, met with James Frear in the latter’s general merchandise store. The conversation between these men concerned the lack of a preparatory school or a high school in the area.”

Soon after, Keystone Academy, “a seminary for young ladies and gentlemen” was founded with the school’s “first term” beginning in 1869. In 1870, Harris Hall, named in honor of Keystone Academy Principal John Howard Harris, was built and still stands proudly as a living monument to its founders. Most notably, inside today’s Harris Hall are the words from the school’s original seal, with the Latin words “Via Fit-Vi” translated as “Progress through Effort.”

Read more about the history of Keystone College.

For Keystonians, those words, perhaps more than anything else, link the past to the present.

“‘Progress through Effort’ really does have a special meaning for anyone who has ever been associated with Keystone,” said long-time Keystone Professor Terry Wise, who has studied the school’s history. “That phrase really symbolizes who we are and what we are all about. We realize that few things in life are easy, but if we continue  to work and continue to believe, success will follow.”

“While the times, needs, and methods have changed, the same spirit of dedicated faculty and staff work together with our students to help them secure their rightful place in our society,” wrote Keystone College President Emeritus Dr. Edward G. Boehm, Jr., who proudly served as Keystone’s ninth president from 1995 until 2013, as he reflected on Keystone’s early history. Students, faculty, and staff form a “chain” to transfer books from the former library, Kemmerer Hall, to the then newly constructed Miller Library in 1968.

“The Phrase ‘Progress through Effort’ really symbolizes who we are and what we are all about. We realize that few things in life are easy, but if we continue  to work and continue to believe, success will follow.” ~ long-time Keystone Professor Terry Wise

Hard work and resulting success did indeed follow in the years and decades to come. Realizing the need for more than just a secondary school, Scranton Keystone Junior College was formed and the first associate degrees were awarded in 1936. The name Scranton was dropped and Keystone Junior College quickly gained the reputation as one of the finest two-year colleges in the nation, sending students to complete their education at top schools such as Lehigh, Bucknell, Lafayette, and many others.

However, by the late 1980s and early 1990s, as community colleges began to expand throughout the nation, the demand for residential junior colleges such as Keystone declined and enrollment began to diminish. Led by Dr. Boehm and a determined faculty and board of trustees, “Progress through Effort” would again prevail.

“We just refused to give up or give in,” said longtime Keystonian Charlotte Ravaioli, who has served the college for over 35 years as a faculty member, academic dean, vice president, and special assistant to the president. “We knew that Dr. Boehm was an exceptional and inspirational leader. We put our faith in him, and in each other, and we made progress day-by-day and year-by-year. At Keystone, that’s really what we do best.”

The rest, as is often said, is history. In the years since awarding our first bachelor’s degree, we’ve come a long way in a short period of time. Today, Keystone offers more than 40 undergraduate, masters, and online degree options to about 1,400 students. Each year at commencement, the College awards about 300 degrees to graduating students.

Campus activities and sports have expanded dramatically over the years. In fact, Keystone now offers 22 varsity sports for men and women, including the reestablishment of football, announced earlier this year. The campus, long regarded as one of the most beautiful in the region and in all of Pennsylvania, continues to grow without losing its natural charm and dignity.

A new multi-million redevelopment project will soon begin along College Avenue, and the end result will be a new complex featuring two restaurants, a fitness club for students and the local community, and a new Keystone College Bookstore. Another project, funded by a grant from the Pennsylvania Department of Transportation, will simultaneously enhance the College’s main entrance.

“This is certainly an exciting time to be at Keystone,” said Keystone President David L. Coppola, Ph.D. “We’ve demonstrated that by working hard and working together, anything is possible. Even more important, as we progress, we still remain true to our basic ideals of providing an excellent education by putting our students first and treating everyone as a valuable member of our community. Through all the changes and innovations, the success of our students will always remain the most critical part of our mission.”

That feeling of pride and comradery is passed down from generation to generation.

“As students, we realize that we are privileged to follow those who came before us and also we know that we have a responsibility to set an example for those students who will follow us,” said sophomore Mark Durdach. “That’s why it’s such an honor to be part of the Keystone tradition.”

A Year of Celebration

Beginning in May 2018, and lasting through May 2019, the entire Keystone Community will join together to honor the past, celebrate the present and look forward to the future. A series of events have been planned for all to experience and enjoy, culminating in a 150th-anniversary gala celebration in May of 2019. Visit www.keystone.edu/150years for celebration updates. Remember, the Keystone tradition begins with you! We can’t wait to see you on campus to help make our 150th year the best ever.